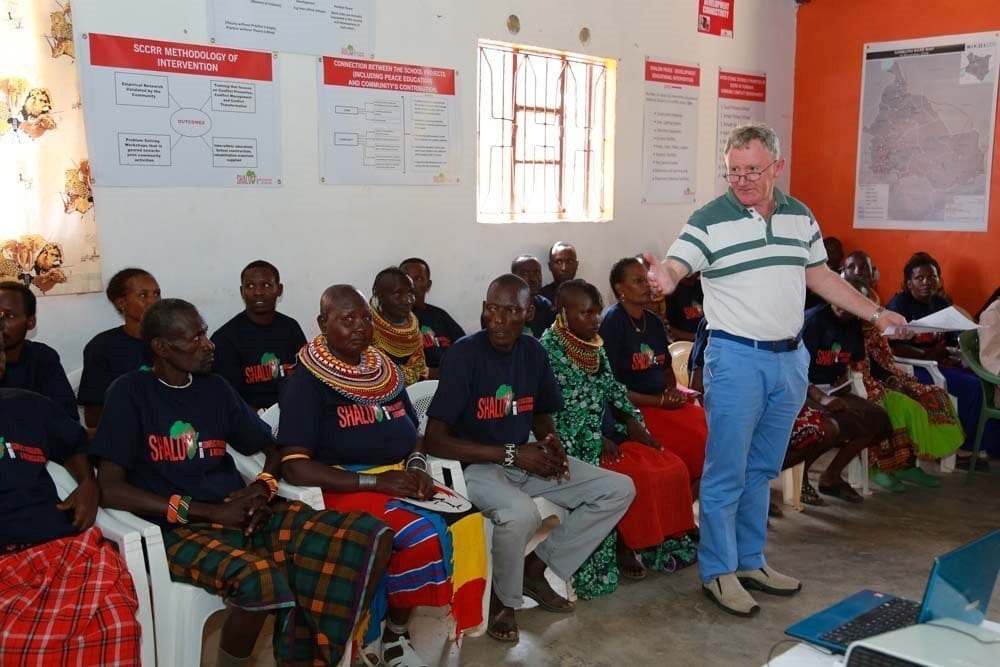 This Eastern Africa nonprofit led by Rev. Dr. Patrick Devine (center) is making a major humanitarian impact in one of the most difficult regions of the world for human existence.

When Rev. Dr. Patrick Devine arrived in a Dassanech tribal village in the often-violent disputed territory between Kenya, Ethiopia and South Sudan, he did not know there had been a deadly reprisal attack the night before by a rival tribe (Turkana) as part of ongoing bloodshed here. But he instantly realized the aftermath was still unfolding. 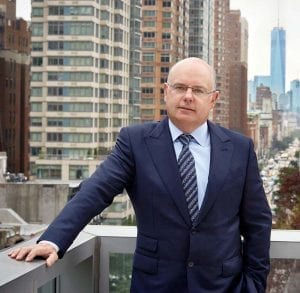 There was shouting and bodies of the dead laid on the ground where they fell, remembers Fr. Devine. Violence seemed about to erupt from the gathered, irate crowd. And then focus turned to Fr. Devine’s group.

As it turned out, two members of Fr. Devine’s research team were general members of the raiding Turkana tribe who had nothing to do with the attack, but the villagers were so enraged that they wanted to kill them in revenge. Fr. Devine acted quickly, moving the men into a mud house for protection.

According to one of the hostages, Lazarus Epae, now a Turkana assistant chief, “Fr. Patrick literally blocked the door and defended us with his body, telling the angry warriors that they would have to kill him before killing us.”

Exuding a determined, peaceful energy that seemed to enfold the hostile crowd, Fr. Devine listened to the villagers’ accusations, anger and grief, especially from the women who had lost their husbands and children. One elderly matriarch saw the folly of further violence, and joined him to convince the eye-for-an-eye crowd to show the two innocent men mercy.

After a number of hours, the situation was de-fused, people listened to reason, and the two threatened men were allowed to pass through the crowd and depart. Paul Agis, the second Turkana hostage, a teacher, says: “If it wasn’t for Fr. Patrick, the two of us would have been killed on that fateful day. We thank God for using him to intervene on our behalf.”

The priest put his own life in danger in order to emphasize that there are non-violent ways to resolve disputes. Then he put his ethos to work restoring calm and helping to evacuate the wounded for medical treatment.

It was obvious that this contentious region needed specific conflict intervention to shift the historic rift between these two tribes, and Fr. Devine’s organization, Shalom Center for Conflict Resolution and Reconciliation, stepped in to help. Since the incident, there have been workshops and development programs in the region that have alleviated hostility, brought about reconciliation and supported joint projects like inter-ethnic schools.

Fr. Devine continues to act as a compassionate and inspiring role model, conflict resolution trainer, fund raiser and leader of Shalom based in Eastern Africa. He created the organization to turn around generations of inter-ethnic and inter-religious conflict, as well as help reduce the grinding poverty. 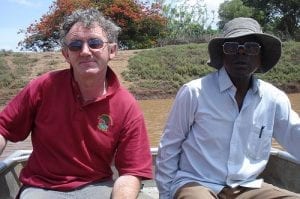 Fr. Devine and Shalom research director, Prof. W. Omoka, must cross the crocodile-infested River Omo in a pole-pushed boat to get to some remote tribal villages.

His ethos: “Lasting peace cannot take hold until basic human needs are met first. And you can’t have sustainable development until there is peace. But real peace is not just the absence of war – positive peace involves reconciliation. That means all groups are mutually committed to the security, development and wellbeing of each other,” he explains.

“Positive results hinge on the input of the Shalom team and the sacrifices of so many visionaries from among the communities in conflict,” says Fr. Devine. He adds: “I can’t speak highly enough about the qualifications, effort and dedication of all the members of the Shalom team.” 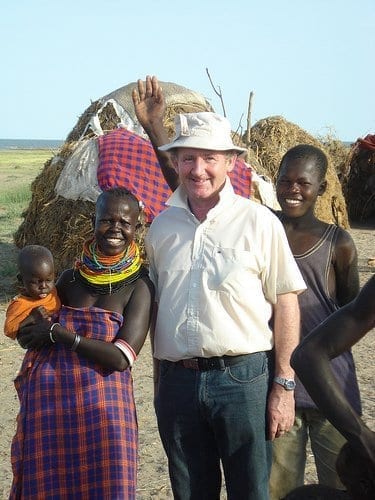 Ordained to be a missionary in Africa, Fr. Devine started his ministry in 1988. He soon identified the need to help warring tribes understand the roots of their conflicts and work together to resolve them for mutual benefit. Determined to make a difference, this selfless, big-hearted priest formally launched Shalom in 2009 after Kenya was rocked by post-election violence.

The inter-religious nonprofit has grown with trained professional staff in Eastern Africa; chapters in Europe and America; and affiliations with prestigious universities and international peace institutions.

“I believe working towards a future for Eastern Africa that is free of physical violence and unjust social structures, where people can live in peace with a feeling of security, and  actually dare to dream of good livelihoods for their children is not only noble, but attainable,” says Fr. Devine.

The core of Shalom’s work is training local leaders and influencers to resolve their own conflicts, and to become architects of a harmonious, interdependent society, according to Fr. Devine. To facilitate this process, Shalom experts explore both sides of a conflict, research social and historical issues, and look at the evidence before developing a negotiating strategy that both sides will want to participate in.

Training workshops teach analytical skills to determine the root causes of entrenched conflicts and techniques for building lasting peace. The trainers empower attendees to apply the principles learned to their living context. Over the past decade, Shalom has trained over 15,670 people in conflict resolution and reconciliation in remote villages and Nairobi’s worst slums. They’ve also educated local authorities and religious leaders on the principles of conflict resolution.

Shalom is simple in philosophy and implementation, says Maurice Regan, CEO of J.T. Magen. “Inter-ethnic schools are a major part of their peace treaty.” 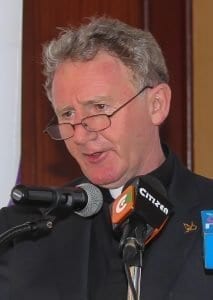 As word of his humanitarian work got out, Fr. Devine was honored with the 2013 International Caring Award succeeding the Dalai Lama. It was first given to Mother Teresa for her humanitarian work in Calcutta, and many world leaders since. He received a prestigious IGAD Award for peace and development work in a region comprising eight northeast Africa member countries in 2014, and was nominated for the 2017 Tipperary International Peace Award.

Internationally, Fr. Patrick has presented lectures at the United Nations Center in Addis Ababa and Harvard University, among many prestigious speaking engagements. Shalom has a Memorandum of Understanding with Queens University Belfast and the Edward M. Kennedy Institute for Conflict Intervention.

And now Shalom-SCCRR can work with leading global organizations focused on enhancing peacebuilding thanks to recent UN accreditation. This formal status enables the organization to work with UN departments, UN-associated NGOs and affiliated academic institutions, as well as attend sessions at UN Headquarters in New York. (Read more about UN accreditation.) 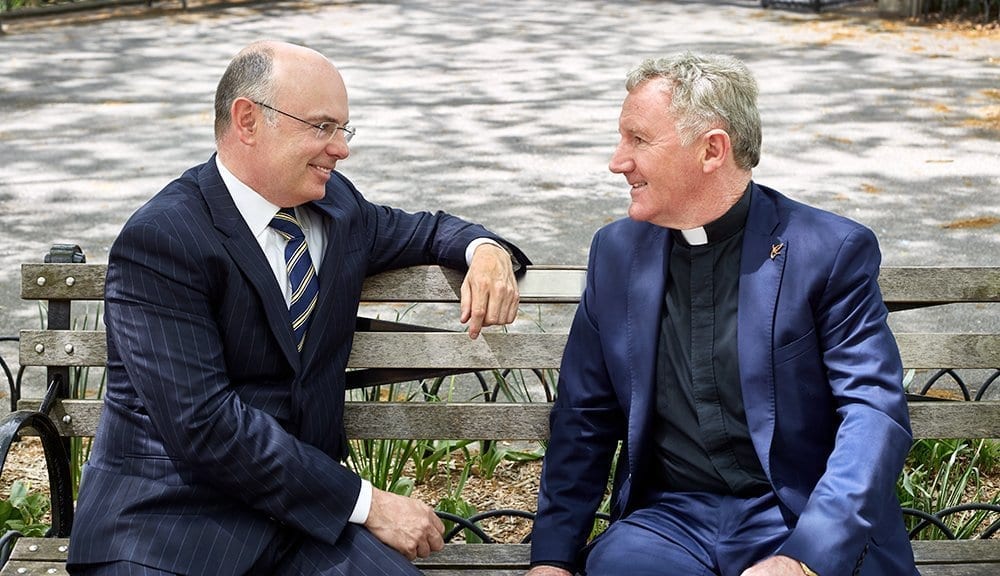 Funding is critical to Shalom’s efforts, and although 95 percent of donations goes directly to peacebuilding and development projects, the professional organization handling the research, training and project implementation needs support, too. When Fr. Devine met Maurice Regan on a fundraising trip to New York, there was an instant connection between the two on altruistic goals and humanitarian imperatives. Regan set out to support Shalom’s work financially and through his connections.

“Father Devine is a rare human being, willing to put himself in harm’s way to do good for others,” says Regan. “He’s so genuine and dedicated to his mission of making a difference in Africa. He and the entire Shalom team have saved and improved the lives of countless numbers of people.”

Regan adds: “Those of us blessed with good fortune have a responsibility to help those less fortunate, and we all want to donate in ways that will make the greatest impact. For me and for many people in the J.T. Magen realm, that organization is Shalom. I encourage everyone to consider Shalom as one of their preferred charities for donations – the need is great and Shalom’s impact is significant.”